Candidates or Districts? Reevaluating the Role of Race in Voter Turnout 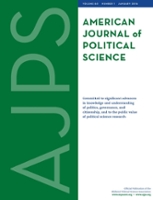 Leading theories of race and participation posit that minority voters are mobilized by co‐ethnic candidates. However, past studies are unable to disentangle candidate effects from factors associated with the places from which candidates emerge. I reevaluate the links between candidate race, district composition, and turnout by leveraging a nationwide database of over 185 million individual registration records, including estimates for the race of every voter. Combining these records with detailed information about 3,000 recent congressional primary and general election candidates, I find that minority turnout is not higher in districts with minority candidates, after accounting for the relative size of the ethnic group within a district. Instead, Black and Latino citizens are more likely to vote in both primary and general elections as their share of the population increases, regardless of candidate race.