The Turnout Gap: Race, Ethnicity, and Political Inequality in a Diversifying America 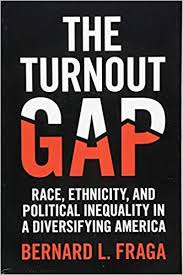 In The Turnout Gap, Bernard L. Fraga offers the most comprehensive analysis to date of the causes and consequences of racial and ethnic disparities in voter turnout. Examining voting for Whites, African Americans, Latinos, and Asian Americans from the 1800s to the present, Fraga documents persistent gaps in turnout and shows that elections are increasingly unrepresentative of the wishes of all Americans. These gaps persist not because of socioeconomics or voter suppression, but because minority voters have limited influence in shaping election outcomes. As Fraga demonstrates, voters turn out at higher rates when their votes matter; despite demographic change, in most elections and most places, minorities are less electorally relevant than Whites. The Turnout Gap shows that when politicians engage the minority electorate, the power of the vote can win. However, demography is not destiny. It is up to politicians, parties, and citizens themselves to mobilize the potential of all Americans.