Gerald Wright received his Ph.D. in political science in 1973 from the University of North Carolina at Chapel Hill. He was on the faculty of Indiana University from 1981 to 2022. Before that he taught at universities in Florida and worked as Program Director for Political Science at the National Science Foundation. He has published over fifty articles and chapters and four books. Most of this work focuses on the relationship between citizens’ preferences and the policy behavior of elected official and governments. His work has been supported with grants from the National Institutes for Mental Health, National Science Foundation and the Russell Sage Foundation. He has several best paper awards from sections of the American Political Science Association as well as awards for his co-authored book, Statehouse Democracy for a work of enduing impact in both of the subfields of state politics and public opinion and elections. He has the Career Achievement award from the State Politics and Policy section. He is currently writing a book on the changes in the U.S. party system over the last forty years with a focus on the impact of party polarization and party positioning on representation and patterns of economic inequality in both the states and the nation. He is in his second year as chair of the Department of Political Science. 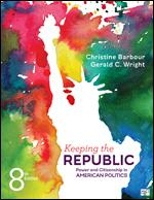 Keeping the Republic: Power and Citizenship in American Politics